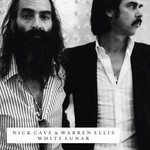 Nick Cave and Warren Ellis have been playing together for more than 15 years, with The Bad Seeds, Grinderman and The Dirty Three. More recently, they've been collaborating on soundtracks for films such as 'The Proposition' (2005) and 'The Assassination of Jesse James by the Coward Robert Ford' (2007) as well as Gisli orn Gardarsson's acrobatic theatrical productions of 'Woyzeck' (2005) and 'Metamorphosis' (2006).

'White Lunar' is a selection of pieces taken from some of the motion pictures and documentaries for which Cave and Ellis have composed and recorded music. The 2CD set includes music from the motion picture 'The Road', based on the book by Cormac MacCarthy ('No Country For Old Men') and starring Viggo Mortensen.

Abattoir Blues / The Lyre of Orpheus