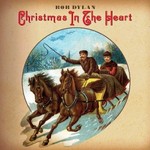 Bob Dylan
Christmas in the Heart

'Christmas in the Heart' is the 47th album from Bob Dylan, and follows his worldwide chart-topping 'Together Through Life', released earlier in 2009.

All of the artist's world-wide royalties will be donated in perpetuity to organizations that provide meals for the hungry, guaranteeing that millions of meals will be served to the hungry and homeless this holiday season, and hopefully for many years to come.

"Christmas In The Heart is an acknowledgment of an underappreciated musical tradition from one of the most important innovators and interpreters of American popular song."
- Huffington Post

"...a fun, nostalgia-inducing romp through the past."
- Washington Times

"Engaging and earnest, Dylan evokes Gene Autry on a jaunty 'Here Comes Santa Claus' and radiates warmth on 'Have Yourself a Merry Little Christmas.' 'Little Drummer Boy' is delivered tenderly in a relaxed croon, and his tenor finds a smooth groove on 'The Christmas Song.'"
- USA Today