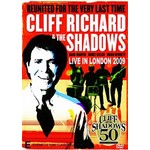 With over two hours of live performance from their 2009 show in London, featuring hits such as "Move It"; "Dance On"; and "Living Doll", along with over 30 minutes of behind the scenes footage & interviews, this is a must have DVD for all fans.