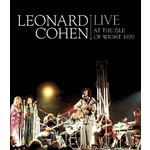 Nearly 40 summers ago on August 31, 1970, 35-year-old Leonard Cohen was awakened at 2 a.m. from a nap in his trailer and brought onstage to perform with his band at the third annual Isle of Wight music festival. The audience of 600,000 was in a fiery & frenzied mood, after turning the festival into a political arena; trampling the fences; setting fire to structures & equipment - and stoked by the most incendiary performance of Jimi Hendrix's career.

This DVD / CD package contains the new film documentary by Murray, featuring interviews with fellow festival performers, as well as Leonard's full performance on CD. All tracks are previously unreleased (sans bits of "Suzanne", which were featured in the documentary 'Message to Love', also by Murray). Included are live versions of classic songs from the first two of Leonard LPs: "So Long, Marianne"; "The Stranger Song"; "Hey, That's No Way to Say Goodbye"; "Suzanne"; "Bird on the Wire"; "You Know Who I Am"; and "The Partisan", as well as spoken word & poetry.

Chimes of Freedom: The Songs of Bob Dylan (Honoring 50 Years of Amnesty International)