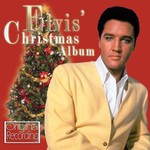 Both RCA and Colonel Parker were quick to exploit and capitalise on the success of Elvis Presley, issuing albums, EPs and singles at regular intervals to try and satisfy the almost constant demand for product. In December 1957 came the release of Elvis' Christmas Album, a collection of eight Christmas songs and four gospel numbers, the latter having already appeared on an EP issued in March that year. There was almost immediate controversy surrounding the album, with White Christmas the track that attracted the most attention. A perennial favourite thanks to Bing Crosby's version, Elvis' own version was styled after The Drifters' version, which had been an R&B hit in 1954 and 1955. The Drifters' version was only aired on black radio stations; Elvis' more mainstream popularity meant his version was aired across the country, although even composer Irving Berlin entered the fray and telephoned radio stations across the country asking them not to play what he viewed as a 'profane parody of his cherished yuletide standard.' Most stations ignored the request and played assorted tracks from the album, helping it top the US charts for four weeks on its way to registering nearly ten million sales over the next fifty years.