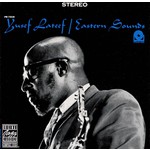 One of multi-instrumentalist and composer Yusef Lateef's most enduring recordings, Eastern Sounds was one of the last recordings made by the band that Lateef shared with pianist Barry Harris after the band moved to New York from Detroit, where the jazz scene was already dying. Lateef had long been interested in Eastern music, long before John Coltrane had ever shown any public interest anyway, so this Moodsville session (which meant it was supposed to be a laid-back ballad-like record), recorded in 1961, was drenched in Lateef's current explorations of Eastern mode and interval, as well as tonal and polytonal improvisation. That he could do so within a context that was accessible, and even "pretty," is an accomplishment that stands today. The quartet was rounded out by the inimitable Lex Humphries on drums -- whose brushwork was among the most deft and inventive of any player in the music with the possible exception of Connie Kay from the Modern Jazz Quartet -- and bass and rabat player Ernie Farrow.

The set kicks off with "The Plum Blossom," a sweet oboe and flute piece that comes from an Eastern scale and works in repetitive rhythms and a single D minor mode to move through a blues progression and into something a bit more exotic, which sets up the oboe-driven "Blues for the Orient." Never has Barry Harris' playing stood up with more restraint to such striking effect than it does here. He moves the piece along with striking ostinatos and arpeggios that hold the center of the tune rather than stretch it. Lateef moans softly on the oboe as the rhythm section doubles, then triples, then half times the beat until it all feels like a drone.

There are two cinematic themes here -- he cut themes from the films Spartacus and The Robe, which are strikingly, hauntingly beautiful -- revealing just how important accessibility was to Lateef. And not in the sense of selling out, but more in terms of bringing people to this music he was not only playing, but discovering as well. (Listen to Les Baxter and to the early-'60s recordings of Lateef -- which ones are more musically enduring?) However, the themes set up the deep blues and wondrous ballad extrapolations Lateef was working on, like "Don't Blame Me" and "Purple Flower," which add such depth and dimension to the Eastern-flavored music that it is hard to imagine them coming from the same band. Awesome.