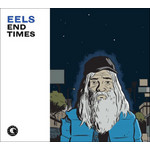 'End Times' follows on the heels of Eels' critically acclaimed 2009 release 'Hombre Lobo', hailed by Vanity Fair as "anti-anthems that get your dopamine pumping instead of your fist" and praised by Rolling Stone for its "muddy roadhouse rockers".

While 'Hombre Lobo' was written from the point of view of a fictional character (namely, the Dog Faced Boy of Eels' 2001 album 'Souljacker'), 'End Times' is purely real life as Everett sees it: a "divorce album" with a modern twist.