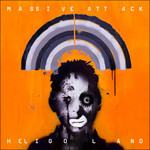 Massive Attack are a seminal group of musical innovators whose work detonated the Bristol music scene of the early '90s and unwittingly gave birth to "trip-hop". The group formed in 1987 around their influential and legendary Dug Out club plus Jamaican-style soundsystem, playing a groundbreaking blend of hip hop, new wave reggae, early house and techno, which shaped their hugely acclaimed 1991 debut, 'Blue Lines'. 'Mezzanine', their third album (released in 1998) proved to be a creative and commercial peak selling in excess of three million albums.

'Heligoland', the long-awaited fifth album from these electronica pioneers comes almost exactly seven years after their 2003 opus, '100th Window'. With founding members Daddy G and 3D, plus a host of famous vocal collaborators on board, including: long time cohort, Horace Andy; Martina Topley-Bird; Damon Albarn; Hope Sandoval; and Tunde Adebimpe, it has a remarkably distinct sound from any of their earlier works, at times even recalling Nick Cave.

As well as singing on the album, Damon also plays bass on the track, "Flat of the Blade", plus keyboards on "Splitting the Atom", while Portishead's Adrian Utley plays guitar on "Saturday Come Slow". The band also collaborated with D.F.A.'s Tim Goldsworthy on selected tracks.

'Heligoland' is quite possibly Massive Attack's most arresting record yet... It's certainly up there with their very best, so make sure you listen to it. ;-)