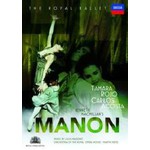 This new high-definition film of MacMillan's hugely-popular ballet 'Manon' is the perfect twin to his classic 'Romeo & Juliet' (August 2009 release). Once again, the romantic male lead is taken by the charismatic Carlos Acosta, and once again his beautiful partner is Tamara Rojo. Prévost's famous tale is set to the sensual music of Massenet and the Royal Ballet's staging is played out against the sumptuous set and costume designs of Nicholas Georgiadis.

'Manon' is the third DVD release from Decca's new exclusive artist, Carlo Acosta. The Cuban superstar builds on his stunning 'Spartacus' (October 2008) and romantic 'Romeo & Juliet' (August 2009) with an elegant and moving performance as the ardent young lover, Des Grieux, in MacMillan's classic version of the tragedy.

This new high-definition film of 'Manon' is the perfect twin to the Royal Ballet's staging of MacMillan's other great classic - 'Romeo & Juliet'. It is one of the most popular ballets in the Royal Ballet's repertory, having received over 200 performances since its premiere in 1974.

This High Definition Widescreen recording was screened in cinemas throughout the UK in early 2009, and broadcast later in the year by the BBC.

'Manon' and 'Romeo & Juliet' signal the beginning of a major collaboration with Carlos Acosta and The Royal Ballet, which continued in early 2009 with the filming of 'La Bayadère'.