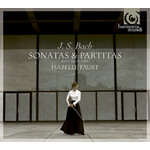 "Hearing this performance, I was convinced more than ever that Faust is one of the greatest violinists of her generation. Needless to say Harmonia Mundi's recorded sound is beautiful. I cannot wait for the next instalment." (Keith)

". . . it is Faust's unmannered, focussed artistry that commands attention, and makes her new disk the most notable solo Bach recording to appear since Gidon Kremer's 2005 account of the Sonatas and Partitas for ECM. Her approach is more straightforward than that of Kremer, who made Bach sound almost experimental; she dances crisply in the quick movements, laments gracefully in the slow ones. But she has a way of pulling you deeper into each piece as she goes, varying and intensifying her phrasing until abstract figures speak in anxious sentences. The Ciaccona in D Minor, Bach's tragic masterwork, unfolds in one unbroken, obsessive arc, an aria for which no words could possibly be found." Alex Ross - New Yorker

"Quite often her playing allows a generous measure of rhythmic freedom...at other times she's concerned to maintain a strong momentum....In short, Faust has a magnificent grasp of this music. Hear her if you can!" Editor's Choice Gramophone June 2010

"Her serious dedication soars from her Stradivarius, a dark-toned beauty but capable of much silver light in its higher reaches...Faust's wonderfully focused playing pulls you right inside the music, and magically makes you imagine the harmonies that Bach only implies." The Times, 10th April 2010 ****

"Faust's account of the music is gently voiced and eloquently inflected. Her lightly articulated bowing, which eschews anything in the nature of aggressive declamation, is a constant pleasure...a poetic player with an irresistably warm sound, a tightly controlled vibrato and an athletic technique." BBC Music Magazine, May 2010 ****

"Faust finds her own distinct path, using minimal vibrato but deploying varieties of tonal colouring and proving plucky enough to add pliability to a phrase or to pause momentarily for expressive effect...[She] plays with exuberance, grace and, in the gavotte, minuets, bourrée and gigue, with polished élan." The Telegraph, 16th April 2010 ****

"Isabelle Faust has gone back to the original manuscript sources to offer us her version of a masterpiece of the violin repertoire.

In Bach's time, music for solo instruments was still little explored territory, and his sonatas, partitas and suites immediately established themselves as a benchmark, technically challenging and brimming with creativity.

After her re-thought and thought-provoking recording of the 10 violin sonatas of Beethoven one of my favourite young violinists turns toward what is often regarded as the everest of the violin literature, the 6 Sonatas and Partitas for violin solo by J.S Bach. Since hearing a single excerpt from this CD I have been curious to hear it as I have always been impressed by Faust's seriousness, musicality and dedication to re-thinking the way great music can be performed. I was not disappointed: her performance of the great d minor Partita with its concluding Chaconne is particularly marvellous. Refusing as always to simply follow the traditional manner of performance Faust subtly and expressively decorates repeats in the opening 4 movements (in particular the Sarabande which is freely decorated in a completely convincing, "singing" way). From the opening bars of the Chaconne, which is attacked with great verve and immediacy it builds to a peak of intensity which is extremely moving, coherent and "thought-through". Hearing this performance, I was convinced more than ever that Faust is one of the greatest violinists of her generation. Needless to say Harmonia Mundi's recorded sound is beautiful. I cannot wait for the next instalment." (Keith@Marbecks)

"Where lesser violinists might meander, Faust makes every note sing. 'A Gavotte en Rondeau' is clean and spirited, without fussy ornamentation; an earlier Largo deals in subtle shifts of mood, although here, as elsewhere, some might find Faust's heavy breathing a tad intrusive."
(Willaim Dart NZ Herald)

Beethoven: Complete sonatas for violin and piano (plus free 'making of' DVD)