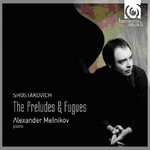 "Melnikov unquestionably gives an impression of freshness and daring, as if he's discovering the music for the first time." (BBC Music Award WINNER 2011 - Instrumental)

"Melnikov is one of the great virtuosi of our time and one remembers his magisterial account of the Brahms D minor Concerto last year with the NZSO. He brings the same brilliance, track after track, to Shostakovich, from the forthright thrust of the G sharp minor Fugue to its dizzying D flat major colleague" - ***** William Dart, June 2010

"Melnikov unquestionably gives an impression of freshness and daring, as if he's discovering the music for the first time...Certainly one's bound to feel, listening to such superb playing, that this is indeed one of the greatest contrapuntal cycles since Bach. Overall, then, a magnificent achievement."
(BBC Music Award WINNER 2011 - Instrumental)

"Few pianists have shown themselves to be so sensitive to music which is the response of a complex visionary to the corrosive banality of Soviet life at the time...[Melnikov] responds to all this with an impeccable all-Russian mastery and with a poetic commitment few could equal."
(Gramophone)

"In this muscular, virile account, [Nikolayeva's] fellow Russian Alexander Melnikov makes you wonder why these works are considered monotonous or didactic. In his virtuosic hands, each one glints."
(Observer)

"Melnikov is consistently alert to (and in control of) the music's dizzying variety of idioms and tones of voice...[He] conveys the scope of the collection as a totality with such consistent penetration and invention that this expertly engineered set can be enthusiastically endorsed for anyone seeking a complete recording"
(International Record Review)

These twenty-four preludes and fugues have become so closely associated with the personality and playing style of their 'official interpreter' (Tatiana Nikolaeva) that history has ended up deciding that 'that's the way to perform them' without looking any more deeply into the matter.

Yet this op.87 is brimming with fascinating answers for anyone who takes the trouble to ask the right questions; and it is not the least merit of Alexander Melnikov to have approached the work from first principles and come up with his own, eminently musical solutions!