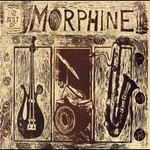 Morphine
The Best of Morphine

"Pay attention to the dates in the title of The Best of Morphine 1992-1995. That chronological spread means it's not a career-spanning best-of, but only covers their early career, with nothing from their final albums for the DreamWorks label. That acknowledged, this is a decent overview of the first part of their discography, with most of the tracks hailing from their Good, Cure for Pain, and Yes albums (there's just one from B-Sides & Otherwise). For Morphine fans who have kept up with all those prior releases, the main point of interest will be the three previously unreleased tracks. All of them are in the sultry jazz-noir-blues-rock typical of the band's output, with "Jack and Tina" rumbling along for eight-and-a-half minutes. It's disappointing, though, that there's absolutely nothing in the liner notes to indicate when those previously unissued items were done and why they remained in the closet. For that matter, strictly speaking "Sexy Christmas Baby Mine" isn't previously unreleased, having come out as a vinyl 45 rpm on the For Singles Only label. As another bonus, there's an enhanced video of "Shame," taken from a live Atlanta TV show."
- AMG