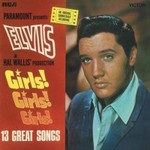 Elvis Presley became a film star in 1956, and would go on to appear in a total of 33 feature films in a span of 14 years. The accompanying soundtracks are fan-sought rarities (both on CD or LP), but 8 of these albums will be available again this time in remastered sound. These 8 are among the best Elvis LP's recorded for his feature movies.

Girls! Girls! Girls! is a 1962 Golden Globe-nominated American musical comedy film starring Elvis Presley as a penniless Hawaiian fisherman who loves his life on the sea and dreams of owning his own boat. When he finds out his boss is retiring to Arizona, he seeks to find a way to buy the Westwind, a boat that he built with his father.

"Return to Sender", which reached #2 on the Billboard pop singles chart, is featured in the movie. The movie opened at #6 on the Variety box office chart and finished the year at #31 on the year-end list of the top-grossing movies of 1962. The movie earned $2.6 million at the box office.

The film was the second of three films Presley shot on location in Hawaii.