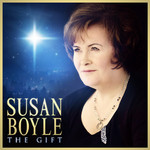 Susan returns with her eagerly awaited second album, including her duet with Amber Stassi - a stunning and inimitable rendition of "Do you Hear What I Hear".

She catapulted to international stardom overnight with 500 million YouTube hits, smashed music records around the world with her triumphant debut album and now Susan Boyle returns with her eagerly awaited second album, 'The Gift'.

'The Gift', sees Susan Boyle and world acclaimed producer Steve Mac reunited to present a breathtaking seasonal album. Featuring yule time favourites "The First Noel" and "O Holy Night", Susan also fearlessly takes on iconic pop songs including "Don't Dream It's Over" and "Perfect Day", giving them a new identity. Also making her musical debut on 'The Gift' is American medic and winner of the International Susan Search, Amber Stassi. Amber & Susan perform a stunning and inimitable rendition of "Do you Hear What I Hear".

Susan explained; "When making this album, I really wanted the songs to touch hearts. Music has always been a companion to me, particularly on special occasions. I wanted there to be a mix of songs that would flow with all our moods this holiday season. As much as the season is a time for reflection, it is also a time for fun and enjoyment with those closest to us."

Simon Cowell added; "Susan broke all the rules, became famous literally overnight and has become one of the world's most popular singers. I'm incredibly proud and pleased for her. I think Susan has gone a step further with this new album. She is a very special lady."

Fly Me to the Moon: The Great American Songbook Volume V
more suggestions…