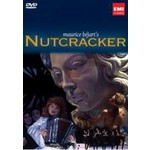 Béjart's magical staging transforms the piece into an enchanting and enchanted autobiography and a loving homage to the choreographer's mother and to his creative hero, Marius Petipa.

Christmas Night. A little boy sits alone by a small, feeble Christmas tree from the branches of which sadly hang garlands salvaged from Christmases past. His mother is dead. Suddenly, in a dream, or by magic, she is there, next to him, and places a small gift at the foot of the tree. The enchanted night begins: the gift grows bigger and becomes a miraculous icon, fiends flood in, the mother appears, alive, followed by two Angels of Light created by Marius-Mephisto. The whole room is dancing and the child begins to laugh. Is it a dream? Reality is that which we feel to be real. Reality is the moment, here and now. Freed from his fear, the boy watches the Pas de Deux from The Nutcracker directed by Marius, his master, and danced by the Prince and Princess.

"I remember! Christmas.. .. Marseille, the tree, the Nativity scene, the presents, the thirteen desserts -among them my favourite -the NUTS! Above all, I loved cracking nuts. My father had shown me that the insides were like a little human brain. I remember.. . My mother. I was seven years old. One evening she said to me, 'your mother is going on a long journey. Promise me you will be good. I remember. Christmas.' "

So wrote Maurice Béjart in his programme notes for his version of the well-loved Christmas ballet The Nutcracker (Casse-Noisette). Béjart's magical staging transforms the piece into an enchanting and enchanted autobiography and a loving homage to the choreographer's mother and to his creative hero, Marius Petipa. The first part of the performance is punctuated by Béjart, on a huge video screen, telling something of his childhood. Summing up his approach to creating this ballet, Béjart remarked, "You live a life and you dream a life. When you come to write your own life you tell a lie to build the truth."

Using Tchaikovsky's score in its entirety, augmented with popular waltz and accordion music performed on-stage by the legendary Yvette Homer, Béjart takes the original St Petersburg story as a springboard from which to evoke the memories, emotions and feelings of his own life's journey: from a Marseille childhood, dominated by the memory of his mother to the passionate commitment to dance, inspired by the father of classical ballet, Petipa. The stage is flooded with allusions to Béjart's actual and imaginary history: characters both real and symbolic, forests, scouting, bull-fighting, bicycles, old songs and much more, create a universe of feeling reaching its apotheosis in a faithful recreation of the original Pas de Deux -a true declaration of love. The only character in his Nutcracker that relates to the original is Mephisto, who replaces Drosselmeyer as the facilitator of fantastical dreams and happenings. Goethe's Faust fascinated Béjart when he was still very young and the choreographer's Mephisto is at the same time his creative hero Marius Petipa. Marius-Mephisto opens up a world to the boy Bim (Béjart) in which his dream life and his desire to dance are intertwined.

Three performances of Béjart's Nutcracker were recorded live fiom the Theatre du Chatelet in Paris for the purposes of this television presentation.

The showman of modem dance, Maurice Béjart's work has been provocative, influential and popular in equal measure. His choreography has always been physically thrilling, setting up an immediate emotional combustion between audience and performer, and he attracted huge new audiences for dance with the Ballet of the Twentieth Century productions he mounted in sports stadia, public squares and circus tents. Since founding the Béjart Ballet Lausanne in 1987, he has been working on a more intimate scale but his style has remained just as electric, vivid and direct in its appeal as ever.