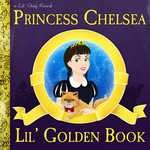 The debut album from NZ composer and bedroom recording artist, Princess Chelsea. "the soundtrack to an old Disney movie meets Kraftwerk fronted by Enya in a 60s production of Les Mis...set in space".

Written, performed and recorded by Princess Chelsea with production assistance from Jonathan Bree and a guest vocal by James Milne.

Princess Chelsea is a New Zealand composer and bedroom recording artist. Rolling Stone has described Princess Chelsea's music as "absolutely sublime", others have described it as "unique, eerie and ethereal" or as if "Yann Tiersen composed the soundtrack to the next Wes Anderson film".

Lil' Chief prefer to describe her music as "the soundtrack to an old Disney movie meets Kraftwerk fronted by Enya in a 60s production of Les Mis...set in space".

Her debut album 'Lil' Golden Book' tells the tale of life growing up as a teenager and young adult in New Zealand and is deeply entrenched in the fantastical yet grounded with a somewhat sardonic wit.