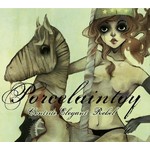 $26.00 In stock with supplier
ETA: 4-7 business days add to cart more by this artist

Recorded in their home studio in Wellington over the course of a year, the album was also developed and expanded into a live theatre piece featuring a choir, string sextet, dance troupe and multi-media elements. It premiered in March 2011 at Bats Theatre, where it was acclaimed as "another clear highpoint" of the Fringe Festival by Lumiere.net.

The Porcelaintoy sound assimilates a number of eclectic musical traditions (from industrial pop to trip-hop to neo-classical romanticism) around the commanding, sultry voice of singer Elizabeth De la Rey to build contemporary, lush pop soundscapes that they can call their own.

Collected: The Best of Massive Attack