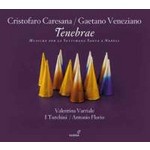 "Valentina Varriale, an I Turchini regular, has clearly been chosen for her highly focused tone which seldom indulges in excess vibrato and blooms into warmth and colour only when the text demands it...These are premiere recordings of first-rate music in affectionate and highly sympathetic performances. An exceptionally beautiful seasonal offering."
(International Record Review)

With Tenebrae Antonio Florio continues on his journey of exploration of the Neapolitan Baroque on Glossa, with a timely release of Lamentations of Jeremiah from one 'known' composer in Cristofaro Caresana, longvalued by Florio, and another from the succeeding generation at the end of the 17th century in Gaetano Veneziano, a pupil of Francesco Provenzale.

The vocal works on this new recording are scored for a solo soprano, also from Naples, Valentina Varriale, fast becoming a central member of Antonio Florio's musical organisation, the recently-renamed I Turchini. Instrumentalists from I Turchini take the opportunity to demonstrate their mastery of the Neapolitan style in string music - a Sinfonia and a four-part Sonata - by Veneziano and one of his contemporaries, Giuseppe Antonio Avitrano.