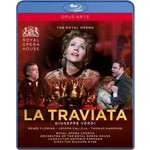 "this is a sensible, believable, attractive presentation that is more in line with Verdi than with the idiocies of Regietheater...Vocally, [Fleming] is on good form at almost every turn." International Record Review, July 2011

"At the age of 50, [Fleming] still looks very good in the role of the doomed courtesan...[she] sounds good, too, singing with consistent skill...There's a sincerity to Maltese tenor Joseph Calleja's portrayal of Alfredo which gives it more spontaneity than his American colleagues supply...Stronger than the vocals is the conducting of Antonio Pappano, which possesses a natural stylishness and fluency" BBC Music Magazine, July 2011 ***

"I was sniffy about her first night but this DVD comes from later in the run, by which time she had found an uncharacteristic emotional freedom. She is still the prima donna playing the part, but the beautiful sounds she makes, especially in the Act One finale and the Act Two party, are well worth hearing, and the high-quality film-work puts us right at the heart of the action." Financial Times, 21st May 2011 ****

"this is a sensible, believable, attractive presentation that is more in line with Verdi than with the idiocies of Regietheater...Vocally, [Fleming] is on good form at almost every turn... Calleja must sound authentic enough as an Italianate tenor for anyone...I always have the impression that [Pappano] works with the singers rather than challenging them to a duel. The chorus and orchestra respond fittingly to his direction." International Record Review, July 2011

"The entire color-scheme of this production seems coordinated with Fleming's bright red hair, and the whole is extremely tasteful and beautiful. Even at around 50 Fleming is quite the looker and can easily convince us that she is 20 years younger. The filming is very well done, and puts to shame the same Royal Opera's version with Solti and Angelina Gheorigiou some years back. The DTS HD surround sound is wonderful, while the Blu-ray visuals are crisp and vivid, nicely capturing the many shades of dark and light that appear in this opera. This is an easy recommendation."
(AudAud.com)