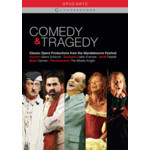 "(Anne Sophie's) Carmen has loads of overt sexuality - she languidly glides through the Habanera while sucking on a piece of fruit and then a cigar - and she shows plenty of temperament and fatalism tinged with fear later. Haddock convincingly confronts the riddle of a baby-faced Don Jose capable of smoldering violence, while Naouri's cocksure Escamillo sings the Toreador Song in a deliberately banal way - which is what Bizet probably intended." (Los Angeles Times on Carmen)

"Under the shrewd direction of McVicar, Anne Sofie von Otter gave us a gypsy of mercurial temperament, a tease, a dangerous flirt, and a woman intensely conscious of her sexual magnetism and of her public notoriety" The Telegraph on Carmen

"This Falstaff is immensely enjoyable and amongst the best that I have watched. I strongly recommend it whether you admire Verdi's last work or not. This is an amiable, pleasing production with an exceptionally fine cast and truly great performances from the orchestra and choir."
(Recording of the Month MusicWeb Nov 2010 on Falstaff)

"A delightful humorous and warm production of the final part of Puccini's Il trittico." (MusicWeb July 2005 on Gianni Schicchi)

"An enchanting account. Set in Mussolini's Italy...it is wonderfully cast and a perfect team effort."
(BBC Music on L'elisir d'amore)