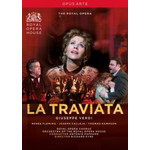 "this is a sensible, believable, attractive presentation that is more in line with Verdi than with the idiocies of Regietheater...Vocally, [Fleming] is on good form at almost every turn." (International Record Review)

"At the age of 50, [Fleming] still looks very good in the role of the doomed courtesan...[she] sounds good, too, singing with consistent skill...There's a sincerity to Maltese tenor Joseph Calleja's portrayal of Alfredo which gives it more spontaneity than his American colleagues supply...Stronger than the vocals is the conducting of Antonio Pappano, which possesses a natural stylishness and fluency"
(BBC Music)

"I was sniffy about her first night but this DVD comes from later in the run, by which time she had found an uncharacteristic emotional freedom. She is still the prima donna playing the part, but the beautiful sounds she makes, especially in the Act One finale and the Act Two party, are well worth hearing, and the high-quality film-work puts us right at the heart of the action."
(Financial Times)

"this is a sensible, believable, attractive presentation that is more in line with Verdi than with the idiocies of Regietheater...Vocally, [Fleming] is on good form at almost every turn... Calleja must sound authentic enough as an Italianate tenor for anyone...I always have the impression that [Pappano] works with the singers rather than challenging them to a duel. The chorus and orchestra respond fittingly to his direction."
(International Record Review)

"...Antonio Pappano takes charge of this revival, searching out the meaning of Verdi's score in a supple, sentient reading that sweeps you along." The Guardian