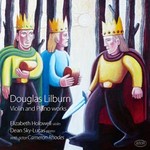 "Two sonatas for violin and piano (1943 and 1950) provide the main and most successful fare for this recital, allowing listeners to follow the development of the composer. The booklet provides good notes on the music. " Otagio Daily Times

"The music of Douglas Lilburn with its clear connection to both his teacher, Ralph Vaughan Williams, and to the landscape of his beloved New Zealand, is a delight and an inspiration."
Elizabeth Holowell

Elizabeth Holowell
Elizabeth commenced her professional career in her native Australia as a foundation member of the Australian Chamber Orchestra. Thereafter, in addition to international concertising, much of her work has centred around the Universities in Australia, and now in Auckland where she has taught and performed for the last 6 years. She is a champion of her primary research area of new, little-known and undiscovered violin repertoire from Australasia.

This CD follows Elizabeth's recent release for Atoll of "Jewel: Australian Gems for Violin and Piano".

Of this latest recording she says, "The music of Douglas Lilburn with its clear connection to both his teacher, Ralph Vaughan Williams, and to the landscape of his beloved New Zealand, is a delight and an inspiration. It is my hope that it will be embraced by violinists across the world as a fresh and unique addition to the violin recital repertoire."

Dean Sky-Lucas
Dean Sky-Lucas commenced his appointment as Lecturer in Collaborative Piano at the School of Music, University of Auckland in 2010, having resided for 15 years in Melbourne, Australia. During this period Dean was both a freelance associate artist and a teacher and lecturer for Australia's most august performing institutions, the Australian National Academy of Music, Melbourne Conservatorium and the VCA at the University of Melbourne. He performed and recorded frequently for ABC FM broadcasts and became known in high prominence as a repetiteur and vocal coach at the Victorian Opera and with Australia's most lauded opera singers.

Cameron Rhodes
Cameron graduated from Toi Whakaari The NZ Drama School in 1987. Since then he has appeared in numerous productions around NZ and has toured in Australia. He also directs theatre, and teaches acting and voice production for actors' and corporate groups. He has appeared in The Lord of The Rings, and NZ films including I'm Not Harry Jenson and the awarding winning short film Brave Donkey.