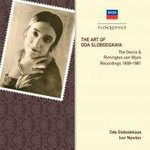 Born in 1888, the Russian soprano Oda Slobodskaya won a scholarship for secondary education but, having completed her schooling, to her displeasure, found herself working with her parents in a second hand clothes shop. Despite having no formal musical training, she travelled, at the age of eighteen, from her hometown of Vilno (then part of the Russian Empire) some 300 miles to St. Petersburg, to audition. She was successful. During the Russian revolution she was ordered to join other singers on obligatory tours to factories and farms to entertain the workers. At the invitation of Diaghilev she starred in the premiere of Stravinsky's opera Mavra. The impresario Rabinoff organised for her to tour America as star soloist with The Ukranian Chorus and while there she made a successful solo debut at Carnegie Hall in New York. But, as a displaced Russian living abroad when appreciation of the Russian repertoire was minimal, Slobodskaya had difficulty finding a good manager. It was at this point that her career took a most unexpected turn. She was persuaded that as a stop-gap measure to earn some much-needed cash she might utilise her talents in the Variety Theatre rather than the opera house, and so under the assumed name of Odali Careno she made her variety debut in Baltimore in 1928. Dressed in a stunning eau-de-nile gown, she was a sensation, singing a mixture of familiar opera arias, ballads and popular songs.

Slobodskaya's recordings are few and far between. A handful of Medtner songs with the composer at the piano were recorded early in the 20th century for HMV. In 1938 she recorded eight sides of Russian songs for a limited edition set of four 78s issued by the Rimington van Wyck record shop in Leicester Square. Slobodskaya had been heard on the radio by Mr. Frederick T. Smith, owner of RvW, and he was so overwhelmed by her voice that he paid for the records to be recorded by Decca. They were issued in May 1942 in a limited edition of 2000 in an attractive brown and gold album. Decca recorded her again in 1945 and 1946, and then in 1961.

The recordings are of cult status, much sought after by collectors of great vocal treasures, and this is their first issue on Decca CD. Andrew Dalton has compiled the collection and provided the liner notes, and the booklet is illustrated with all the album jackets as well as illustrations from program booklets, making this a real collector's item.

This release marks the launch of an Eloquence series of notable recitals of songs and opera arias by some of the great voices of Decca and Deutsche Grammophon.

Blanter:
In the Forest by the Front Line
Katyusha

Borodin:
From my tears sprang flowers
Morskaya tsaryevna (The Princess Of the Sea)

Grechaninov:
Lullaby, Op. 108
The Dreary Steppe
Like an angel
My country

Taneyev:
Nocturne
Dreams
My Heart is Beating
In the Silence of the Night

Tchaikovsky:
Was I not a blade of grass?, Op. 47 No. 7
Zabït tak skoro (So soon forgotten)
If only I had known, Op.47, No.1
Na nivi zhyoltiye (On the golden cornfields), Op. 57 No.2
Puskay pogibnu ya 'Tatiana's Letter Scene' (from Eugene Onegin)
(with London Symphony Orchestra, Anatole Fistoulari)
Child's Song

Tcherepnin:
I would have kissed you