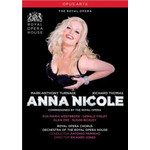 "...It's a tremendous show...shocking it isn't; stunning it is!" The Independent

In a tragic-comic take on the extremes of celebrity culture, composer Mark Anthony Turnage, librettist Richard Thomas and director Richard Jones add Anna Nicole Smith to opera's gallery of bad, sad girls. A pneumatic Playboy model who married an octogenarian billionaire, she achieved grotesque fame before her destitute, drugriddled death. With its jazz-coloured score and Eva-Maria Westbroek's starry performance, this is, as the New York Times said: "an engrossing outrageous, entertaining and, ultimately deeply moving opera".

"...It's a tremendous show...shocking it isn't; stunning it is!" The Independent

Contains very strong language and scenes of a sexual nature

Behind the scenes feature including artist interviews