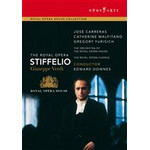 "Monday's performance was beyond any but nit-picking criticism. Downes's conducting confirmed him as one of the (if not the) world's leading Verdians - grandeur, sweep, energy, allied to extraordinary delicacy. Elijah Moshinsky's production spared us nothing in rawness and immediacy, and indeed, dramatic truth… This Stiffelio is a great event: move mountains to see it."
(The Times)

Once regarded as Verdi's lost opera because of early censorship and controversy, Stiffelio has now established its rightful place in Verdi's canon. In this 1993 recording from the Royal Opera House, Covent Garden, José Carreras, as the Protestant minister whose faith is shattered when he discovers his wife's adulterous liaison with a family friend, leads a fine cast that includes Catherine Malfitano, Gregory Yurisich, Gwynne Howell and Robin Leggate under the baton of Edward Downes.