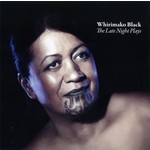 Best known for her albums sung in Te Reo Maori, Whirimako Black explores new territory on The Late Night Plays with full English renditions of some her favourite songs from the twentieth century.

The track selection will be familiar to most with songs made famous by U2, Joni Mitchell, Stevie Wonder, Billie Holliday, Etta James and Leonard Cohen. Whirimako's velvet delivery of each ensures a consistency throughout the album and a uniqueness that makes you forget the songs aren't hers.

The Late Night Plays was produced by Whirimako and long-time collaborator Russel Walder. Russel, known for his own performance career, his compositions and associations with prestigious label Windham Hill, helped assemble a top raft of players including Michael Chaves (Guitarist for Sarah McLaughlin), Aron Ottignon (Parisian based Pianist), Kim Paterson (known as "New Zealand's own Miles Davis") and Jonathan Zwartz (and his 100 year old bass).

Together Through Life
more suggestions…