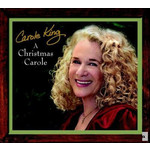 Carole King presents her first ever Christmas album. Produced by her daughter Louise Goffin, the album's 12 songs artfully blend the sacred and the secular...

Carole King presents her first ever Christmas album, 'A Christmas Carole'. Produced by her daughter Louise Goffin, the album's 12 songs artfully blend the sacred and the secular with an eclectic mix of well-chosen standards and newly-written material. Goffin co-wrote three original tracks on the album, including the atinflavored "Christmas in Paradise," on which she collaborated with Grammywinners George Noriega and Jodi Marr, the sublime Goffin/Marr composition "Christmas In The Air," and the deeply moving "New Year's Day," co-written with renowned songsmith Guy Chambers.

For King, the album's emotional highlight is undoubtedly "Chanukah Prayer." "Louise had the brilliant idea to take the Chanukah prayer that I learned from my parents, and they learned from their parents, and back through generations," she explains. "She said 'I want to record you singing that and I'm going to build a track around it.'" The result is a warm, jazz-inflected tune that brings together three generations on vocals: King, her daughter, and her grandson.

1. My Favorite Things
2. Carol of the Bells
3. Sleigh Ride
4. Christmas Paradise
5. Everyday Will Be Like A Holiday
6. Chanukah Prayer
7. Have Yourself A Merry Little Christmas
8. I Got My Love To Keep Me Warm
9. Christmas in the Air
10. Do You Hear What I Hear
11. This Christmas
12. New Year's Day