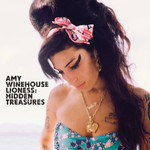 "It was a thrill to record with Amy Winehouse and when you listen to the recording of Body and Soul, it is a testament to her artistic genius and her brilliance as one of the most honest musicians I have ever known."
- Tony Bennett

'Lioness: Hidden Treasures' is the third album from Amy Winehouse - without question one of the most talented, original, and best loved artists to emerge in popular music for decades. The 12 track collection features previously unreleased tracks, alternate versions of existing classics, as well as a couple of brand new Amy compositions, and has been compiled by long-time musical partners Salaam Remi and Mark Ronson in close association with Amy's family, management and record label Island Records. 'Lioness: Hidden Treasures' proves a fitting tribute to the artist, the talent and the woman and serves as a reminder of Amy's extraordinary powers as a songwriter, a singer and an interpreter of classics.

Following her tragic passing in July, some of the producers and musicians who worked closely with Amy Winehouse (among them Mark Ronson and Salaam Remi), spent time listening over the many recordings that Amy had made, before, during, and after the release of 'Frank' and 'Back to Black'. It was said by all who worked with Amy that she never sang or played a song the same way twice. It quickly became apparent to Salaam and Mark that they had a collection of songs that deserved to be heard, a collection of songs that were a fitting testament to Amy the artist and, as importantly, Amy their friend.

Speaking about the album Amy's father Mitch had this to say:
"I spent so much time chasing after Amy, telling her off, that I never realized what a true genius she was. It wasn't until I sat down with the rest of the family and listened to this album that I fully appreciated the breadth of Amy's talent, from jazz standards to hip hop songs, it really took my breath away. "Halftime", I'd never heard it before, is just incredibly beautiful. If the family had felt that this album wasn't up to the standard of 'Frank' and 'Back to Black' we would never have agreed to release it and we believe it will stand as a fitting tribute to Amy's musical legacy."
- Mitch Winehouse

"Between The Cheats" - new Amy composition recorded in London in May 2008 for potential inclusion on album three produced by Salaam Remi.

"Tears Dry" - originally written by Amy as a ballad, this is the original version she recorded in November 2005 in Miami with Salaam. The later uptempo version appears on 'Back to Black'.

"Wake Up Alone" - the first song recorded for the 'Back to Black' sessions. This is the one-take demo recorded in March 2006 by Paul O'Duffy.

"Will You Still Love Me Tomorrow" - Amy's beautiful reading of the Carole King-written Shirelles classic. Produced by Mark Ronson and featuring the Dap Kings with string arrangements by Chris Elliott who did all the strings for Mark's tracks on 'Back to Black'. Recorded in September 2004.

"Valerie" - one of Amy's jukebox favourites. This is the original slower tempo version of the Mark Ronson-produced post "Back To Black" single. Recorded in December 2006.

"Like Smoke" featuring NAS - Amy and Nas became really good friends after Amy name-checked the New York rapper on 'Back To Black's "Me & Mr Jones". "Like Smoke" is Amy finally doing a song with one of her favourite artists. Produced by Salaam Remi. Recorded in May 2008.

"The Girl From Ipanema" - the first song the 18-year-old Amy sang when she first went to Miami to record with Salaam. Salaam remarked that "the way she re-interpreted this bossa nova classic made me realise that I was dealing with a very special talent. Her approach to the song was so young and fresh, it really inspired the rest of our sessions." Recorded in May 2002.

"Halftime" - Amy had talked to Ahmir 'Questlove' Thompson of the Roots about working together. "Halftime" is a song that Amy and Salaam had worked on since the Frank sessions. The result is beautiful. Recorded in August 2002.

"A Song For You" - heartbreaking and emotional version of the Leon Russell classic made famous by Donny Hathaway. Hathaway was Amy's all-time favourite artist and the song was recorded in one take, just Amy and her guitar, at her home in London during the spring of 2009 as she battled her demons. Produced by Salaam Remi.

Sketches For My Sweetheart the Drunk

The Concert in Central Park