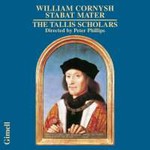 "Cornysh's music is a riot of abundant, often seemingly wild melody, constantly in search of wanton, abstract, dare-devil ideas. Take, for example, the extraordinary conclusion to the five-part Magnificat, where pairs of voices are challenged with music of gradually increasing complexity, peaking in an exchange of quite hair-raising virtuosity between the sopranos - and all this just for the words 'and ever shall be, world without end'! As far as the sacred works are concerned, The Tallis Scholars respond magnificently to Cornysh's audacious imagination. Theirs is a majestic and glorious sound, to be relished in full in the Stabatmater, a huge piece that survives incomplete and for which the late Frank Harrison composed treble parts that may even trump Cornysh himself in their sheer bravura. Marginally less striking in The Tallis Scholars' performances are the short partsongs and the carol Woefully arrayed, robbed as they are here of some of their latent expressiveness and strength by being sung (admittedly very beautifully) in an inappropriately resonant building, and in rounded modern English vowels. But judged as a whole this disc must be reckoned an outstanding success."
(Gramophone Classical Music Guide)