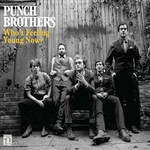 Ten original Punch Brothers songs, plus the band's interpretations of Radiohead's "Kid A" and the Swedish group Väsen's "Flippen".

Ten songs from 'Who's Feeling Young Now?' were written by Punch Brothers, with the band's friend Josh Ritter co-writing lyrics on two tunes ("Hundred Dollars" and "New York City"). Additionally, the album contains the band's interpretations of Radiohead's "Kid A" and the Swedish group Väsen's "Flippen".

Punch Brothers was formed in 2006 by mandolinist/singer Chris Thile with four other virtuosic musicians: fiddler Gabe Witcher, banjo player Noam Pikelny, bassist Paul Kowert, and guitarist Chris "Critter" Eldridge. Their first Nonesuch record, Punch, was released in 2008 and combined elements of the band's many musical interests, including indie rock, folk, jazz, bluegrass, and classical music. In 2009 they all moved to New York City and began a regular, standing-room-only, residency at the Living Room, trying out new songs as well as inspired covers; these shows ultimately spawned Antifogmatic.

The Harrow & The Harvest