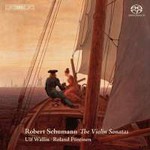 This item is currently out of stock. We expect to be able to supply it to you within 2 - 6 weeks from when you place your order.

Robert Schumann's three Sonatas for violin and piano were all composed between 1851 and 1853, and have suffered from neglect like other works from this period in the composer's life.

Here the performers are Ulf Wallin and Roland Pöntinen: a team who recorded their first disc for BIS in 1991, and whose partnership has been described as 'masterfully cultivated ensemble playing' on ClassicsToday.com.

Wallin's credentials in Schumann are firmly established, after his recently released recording of the violin concerto, the Fantasy and the arrangement for violin of the cello concerto has been met with considerable critical acclaim.