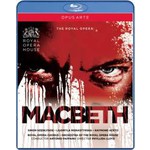 "Keenlyside sings the title role with imagination and insight...Pappano is an authoritative Verdian, punching the score out into the theatre." BBC Music Magazine, May 2012 ****

"Lloyd's Covent Garden staging of Verdi's opera has a good deal going for it; there's plenty of atmosphere in Anthony Ward's aptly dark-toned sets...Keenlyside sings the title role with imagination and insight, even if his lyric approach doesn't command the full cut and thrust of a true Verdi baritone...Pappano is an authoritative Verdian, punching the score out into the theatre." BBC Music Magazine, May 2012 ****

"An excellent release, altogether, and something that any fan of the opera would enjoy."
(Recording of the Month may 2012)

Manipulated by a whole coven of cunning, scarlet-turbanned witches, the characters often evoke figures in a splendid Gothic fresco. With Simon Keenlyside making his British role-debut, as an athletic, brooding Macbeth and Liudmyla Monastyrska as his Lady, both imperious and subtle, this performance, masterfully conducted by Antonio Pappano, goes far beyond mere sound and fury.

This production went out LIVE to cinema screens around the world.

…an impressive company showcase, full of moments when chorus and orchestra are at full throttle. Whipped up by Antonio Pappano's baton, they sound truly thrilling.'The Guardian