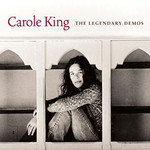 A previously unreleased collection of 13 history-making Carole King recordings of some of her most celebrated songs.

Carole King is arguably the most successful and revered female songwriter in pop music history. To date, more than 400 Carole King compositions have been recorded by more than 1000 artists, resulting in 100 hit singles - many of them reaching #1. A member of the Rock and Roll Hall of Fame, King was the first woman to win four Grammy Awards in one year, and her landmark 1971 album 'Tapestry' has sold more than 25 million units sold worldwide. Quite simply she is a legend.

'Legendary Demos' is a previously unreleased collection of 13 history-making Carole King recordings of some of her most celebrated songs. It traces King's journey from her days as an Aldon staff writer in the 1960s, where she crafted hit after hit for other artists, to the dawn of her own triumphant solo career in the 1970s. The CD includes extensive liner notes of stories behind the songs.