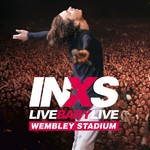 On Saturday 13th July 1991 INXS, one of the world's most revered and iconic bands, delivered the gig of their lives at London's Wembley Stadium to 74,000 ecstatic fans.

The band played over 2000 shows before singer Michael Hutchence's untimely passing 20 years ago, but Wembley was THE ONE, not only were the band on fire, but the audience was too, both band and crowd knew this would be the performance of a lifetime.

The stunning performance features the hits 'Need You Tonight', 'New Sensation' & 'Devil Inside' and show the Australian icons at the peak of their powers.

CD1:
Guns In The Sky
New Sensation
I Send A Message
The Stairs
Know The Difference
Disappear
By My Side
Hear That Sound
Original Sin
Lately
The Loved One
Wildlife