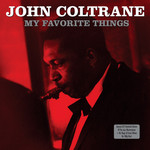 The two LPs in this set, though produced very much in the same era and both packed with music of the highest quality, represent drastically different scales of importance in the recording career of saxophonist John Coltrane, one the most influential figures in the history of African-American music. 'My Favorite Things' is a key item in Coltrane's discography, whereas it is unlikely that the making of 'Bags & Trane' in early 1961 was instigated by Coltrane himself. However, judging by the aural evidence, it is equally unlikely that Coltrane would not have welcomed the chance to work with Milt 'Bags' Jackson, one of the more unusual figures in the bebop revolution which had been his primary inspiration.