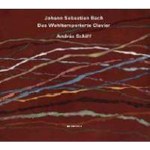 As a young pianist, András Schiff earned wide esteem for his 1980s recordings of the major keyboard works of J.S. Bach; in recent years, as part of his long term relationship with ECM, he has gone back to Bach as a sage veteran, earning more acclaim for his New Series recordings of the Goldberg Variations (2003) and the six Partitas (2009). Now, using his own Steinway, Schiff turns his focus to the 48 preludes and fugues of The Well-Tempered Clavier, making studio recordings in Lugano of both books for this 4-CD set.

"I have eagerly awaited this new recording of the well Tempered Clavier from my favourite living pianist Andras Schiff for some time. I'm still absorbing the wealth of material presented in this 4 hour long journey around all the major and minor keys but so far I would rate it as one of the most convincing performances of the cycle I've yet encountered. I may review it in more depth later but let me point out what is most obvious from the outset and expected from a pianist such as Schiff: the absolute control of nuance, the perfectly executed finger-legato (Schiff plays Bach entirely without pedal but with not a trace of "dryness" or clipping in the phrasing), the singing quality of the counterpoint, the presence of a degree of wit or sparkle and the dramatic use of varied pauses between some of the pieces to elucidate the overall narrative of the cycle." (Keith@Marbecks Classical)

"His new Well-Tempered Clavier reveals many instances of interpretative refinements and rethinking...To be sure, Schiff does not always surpass his younger self. The Book 2 B flat major Prelude's newly calibrated linear profile misses the earlier traversal's suppleness and humour...Reservations aside, Schiff remains a stimulating Bach pianist who happily refuses to rest on his discographical laurels." Gramophone Magazine, November 2012

"Playing with crystalline clarity and a rhythmic buoyancy that highlights the works' dance elements, Mr. Schiff reveals the contrapuntal brilliance and the joy, wit and melancholy of these 24 preludes and fugues." New York Times, 23rd November 2012

"He presents each prelude and fugue as a carefully polished gem. Not using the sustaining pedal helps give the impression of separation between notes - as one hears more on a harpsichord. This serves to bring out the rhythms of the pieces. His ornamentation is subtle and limited, but one gets the feeling that it is just right...a fine recording of Bach's great preludes and fugues - one that even those hesitant to listen to the work on a modern piano should seek out." MusicWeb International, January 2013