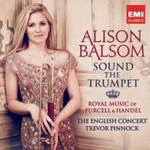 "For historical accuracy, she plays the valve-less "natural" trumpet: it really does appear to offer a more direct access to the human voice, a quality confirmed when she duets with countertenor Iestyn Davies" (The Independent)

"The music is glorious; so is Balsom's artistry as she weaves a flawless path alongside Trevor Pinnock's English Concert" (The Times)

In the year of Queen Elizabeth II's Diamond Jubilee, Alison Balsom celebrates the heroic era of the Baroque trumpet in works by George Frideric Handel (1685-1759) and Henry Purcell (1658 or 1659-1695), whose anthems, odes, sinfonias and operas have provided the music for numerous royal celebrations from their own day to the present.

Joining forces with Trevor Pinnock, harpsichordist, conductor and pioneer of historical performance, and with the English Concert orchestra that he founded, Balsom demonstrates the versatility and expressive power of her valve-less instrument in original works and new arrangements. These include Purcell's Sound the trumpet and Handel's Eternal Source of light divine in duet with countertenor Iestyn Davies and Purcell's The Plaint from The Fairy Queen in duet with soprano Lucy Crowe. Further repertoire includes suites from Purcell's semi-operas King Arthur (1691) and The Fairy Queen (1692) in new arrangements by Balsom and Pinnock, Handel's Water Piece in D Major HWV 341 and his Oboe Concerto No. 1 in B-flat Major HWV 301 transposed into C Major.

Alison Balsom is one of today's most popular classical musicians. Having managed to break through to the mainstream without abandoning her musical integrity, she continues to draw ever-wider audiences for her performances and recordings of diverse repertoire.

Beethoven: Complete sonatas for violin and piano (plus free 'making of' DVD)