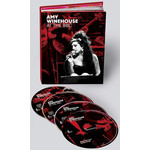 'Amy Winehouse at the BBC' is a four-disc collection chronicling the many remarkable performances by one of the greatest and most genuine talents to emerge in British music in decades. Spread across three DVDs, and one CD, this comprehensive collection captures the strong and enduring relationship that Amy enjoyed with the BBC and is further proof of what an extraordinarily talented, completely original, and truly engaging performer Amy was.

Disc 1 is a DVD selection of recordings chosen by Later presenter, songwriter and musician Jools Holland, Disc 2 is a 14-track CD of performances dating from 2004 to 2009, while Disc 3 is a DVD which features Amy's memorable Porchester Hall sessions. Disc 4 is perhaps the centrepiece of the box set - 'Amy Winehouse - The Day She Came to Dingle' is a short film featuring a fascinating interview with the artist intercut with Amy, at the height of her powers, delivering an electrifying 20 minute live performance recorded in December 2006 in a tiny church.

Like her three previous albums, 'Amy Winehouse at the BBC' will prove, once more, a fitting tribute to her peerless artistry, phenomenal talent, and extraordinary powers as a songwriter, a singer and an interpreter of classics.