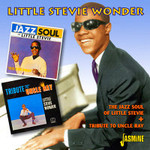 This collection presents the very first recordings of Little Stevie Wonder produced and released during 1962.

Featured here are his first two albums, 'The Jazz Soul of Little Stevie' and 'Tribute to Uncle Ray' which were released simultaneously by the then twelve year old Motown genius.

Includes the first studio version of his 1963 No. 1 'Fingertips'.

A couple of years before his first hits these tracks still sound fantastic and from these modest beginnings, Little Stevie Wonder would become one of the 20th Century's most important and influential recording artists.