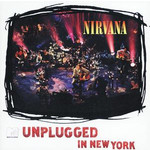 What is ultimately so sad about Kurt Cobain taking his own life is that he was so giving to others, constantly campaigning for the artists who influenced him. Cobain breathed new life into the Raincoats' career, brought a wider audience to Eugenius' pop genius, and proved there was grunge in Seattle before the '90s by covering a Wipers song on INCESTICIDE.

The same reverential awe seeps through every minute of the UNPLUGGED IN NEW YORK performance, released nearly a year after its recording in November 1993. Cobain's originals, from the wrenching "All Apologies" to the numbing "Dumb," exempify his rare gift of saying so much with deceptively simple chords and melodies. His choice of covers displays influences as diverse as David Bowie and the Meat Puppets, and possibly most surprising, Leadbelly--included is a ferocious version of "Where Did You Sleep Last Night?"