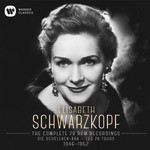 In 1946, the young Elisabeth Schwarzkopf made her first recording with the British producer Walter Legge in Vienna. He became her husband in 1953. All the recordings in this 5-CD collection date from the first six years of their professional and personal relationship, as Schwarzkopf, with the captivating freshness of her voice and finesse of her artistry, established herself as one of the leading sopranos of her time.

These recordings were made between 1946 and 1952 and were all were produced by the legendary Walter Legge, who became Schwarzkopf's husband in 1953. He was a determining influence on her career, perhaps above all in her interpretations of the songs of Hugo Wolf, which feature prominently in this collection.

Schwarzkopf first met Legge in 1946, when the British producer visited Vienna (where the German-born soprano was based) to meet Herbert von Karajan and to scout for talent.

In 1976, the British music critic Edward Greenfield, who knew Elisabeth Schwarzkopf well, wrote in Gramophone: "If Elisabeth Schwarzkopf has established herself as a positive artist of unrivalled magnetism, she is the first to attribute to Walter Legge a dominant share in that success. 'If I say I'm His Master's Voice, people think I'm joking,' she says, 'but I'm not'. That first audition [in Vienna in 1946] proved at the very start that Schwarzkopf's firm will could stand up to Legge's insistence, that her all-demanding artistic standards could blossom from the most searching scrutiny, that their talents, and indeed their strong and vital personalities, were complementary."

Schwarzkopf re-recorded a number of the items later in her career, with greater vocal richness and still more interpretative insight, but these recordings from the 78 era show her voice and artistry at their freshest. ü A number of items are reminders of her early prowess as a lyric coloratura soprano - for instance Konstanze's arias from Mozart's Die Entführung aus dem Serail, Johann Strauss' Frühlingsstimmen and her assumption of the role of Sophie in Der Rosenkavalier (she later, of course, became celebrated as the Marschallin).

No less than 25 tracks in this set are released for the first time on CD.