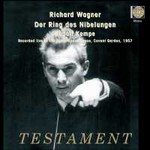 Wagner's complete Ring cycle under Rudolf Kempe, recorded live at the Royal Opera House, Covent Garden, in 1957 is being released shortly by Testament.

The cast is headed by a galaxy of top class singers at the peak of their powers, including Hans Hotter (Wotan/Wanderer), Birgit Nilsson (Brünnhilde), Wolfgang Windgassen (Siegfried), Ramón Vinay (Siegmund) and Sylvia Fisher (Sieglinde).

The annual Ring cycle at Covent Garden in the late 1950s was highly regarded by audiences and critics alike for presenting the leading Wagnerian singers of the day in outstanding performances, most of which at that time were conducted by the much admired Rudolf Kempe.

The transfers are being made using high quality source material from Lord Harewood's collection.

"This cast is a mixture of international Wagnerians and Covent Garden residents, with the Wotan (Hotter), Siegfried (Windgassen) and Siegmund (Vinay) common to the 1955 Bayreuth set. The glory here is Birgit Nilsson's gleaming Brünnhilde, already 39 years old, but sounding youthful, touching and tireless. The set is a reminder of the strengths of the company at this period, with Joan Sutherland leading the Rhinemaidens." Sunday Times

"Perhaps Kempe's lyricism doesn't always measure up completely to the darker moments in the drama. There's more anguish to be found in Walküre, for instance, than he allows, more bleakness in Götterdämmerung, and the recording quality is at best acceptable. But the virtues of this set far outweigh the drawbacks, and the best of it is gloriously compelling" The Guardian