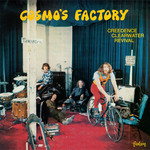 Includes a voucher to download MP3 version of the album.

Throughout 1969 and into 1970, CCR toured incessantly and recorded nearly as much. Appropriately, Cosmo's Factory's first single was the working band's anthem "Travelin' Band," a funny, piledriving rocker with a blaring horn section -- the first indication their sonic palette was broadening. Two more singles appeared prior to the album's release, backed by John Fogerty originals that rivaled the A-side or paled just slightly.

When it came time to assemble a full album, Fogerty had only one original left, the claustrophobic, paranoid rocker "Ramble Tamble." Unlike some extended instrumentals, this was dramatic and had a direction -- a distinction made clear by the meandering jam that brings CCR's version of "I Heard It Through the Grapevine" to 11 minutes. Even if it wanders, their take on the Marvin Gaye classic isn't unpleasant, and their faithful, exuberant takes on the Sun classics "Ooby Dooby" and "My Baby Left Me" are joyous tributes.

Still, the heart of the album lays in those six fantastic songs released on singles. "Up Around the Bend" is a searing rocker, one of their best, balanced by the menacing murkiness of "Run Through the Jungle." "Who'll Stop the Rain"'s poignant melody and melancholy undertow has a counterpart in Fogerty's dope song, "Lookin' out My Back Door," a charming, bright shuffle, filled with dancing animals and domestic bliss - he had never been as sweet and silly as he is here.

On "Long as I Can See the Light," the record's final song, he again finds solace in home, anchored by a soulful, laid-back groove. It hits a comforting, elegiac note, the perfect way to draw Cosmo's Factory -- an album made during stress and chaos, filled with raging rockers, covers, and intense jams -- to a close.
5 / 5 All Music Guide.

Side One:
1. Ramble Tamble
2. Before You Accuse Me (Take A Look At Yourself)
3. Travelin' Band
4. Ooby Dooby
5. Lookin' Out My Back Door
6. Run Through The Jungle