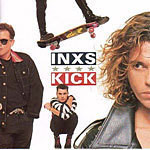 Throughout the 1980s and early 1990s INXS were among the biggest acts in the world. Based around the three Farriss brothers and fronted by one of rock's most charismatic and exuberant singers, the late Michael Hutchence, INXS fashioned a swaggering brand of funky rock. To date they have sold over 25 million albums and in their halcyon days had a string of heaven-sent Australian, U.K. and U.S. Top 10 smash hit singles.

Originally released in 1987, 'Kick' was the sixth (and best) INXS studio album. It was recorded at Rhinoceros Studios in Sydney with Chris Thomas producing. It opens with the punchy "Guns in the Sky", before continuing on with a double dose of INXS magic in "Devil Inside" & "New Sensation", both highly characteristic of the group's succinct song-writing sensibilities. There are many other abiding moments on 'Kick', the most memorable of which is track 8, the band's hugely popular "Never Tear Us Apart". This striking ballad epitomizes the potent chemistry that connected the 6 members of the group - a convergence of talent that manifests itself within all 12 of these hook-laden, modern classics.

Whatever anyone else thinks or says about INXS & Michael Hutchence, it can't be denied that the 'Kick' album certainly left an indelible mark on '80s pop culture and beyond. It's an outstanding example of a band at their prime!