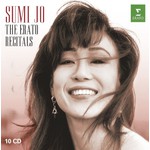 International Korean superstar Korean soprano Sumi Jo made 10 recital albums for Erato and Warner Classics. They include some of her most captivating performances from Mozart to Johann Strauss, from Bach to Rossini, from Scarlatti to Verdi, Baroque, Christmas, love songs, devotional music and more.

"This 2012 set brings together 10 albums made by coloratura soprano Sumi Jo in the 1990s. Her agile voice is heard in selections by composers from George Frederick Handel and Henry Purcell to Stephen Sondheim and Frank Wildhorn. One of her signature arias, "Der Hölle Rache" from Die Zauberflöte, gives an idea of Jo's technical ease, as does "Adele's Laughing Song" from Die Fledermaus. One disc is devoted to classical Christmas favorites, both vocal and instrumental; another, Only Love, is a collection of Broadway tunes from shows such as Jekyll and Hyde, Miss Saigon, Nine, and Follies. Most of the other discs feature soprano solos from the great operas and choral works of the Baroque, Classical, and Romantic eras. There is plenty to choose from here, and it gives Jo's fans a chance to catch up on recordings haven't been widely available in a long time that they may have missed." AllMusic.com

"..we should not be surprised at her spectacular versatility. This is eminently in evidence in the steadied lilt of Draussen In Sievering (listen to her singing over the central pizzicato) but she shines in these songs time after time. No mere technician of the vocal chords, she sings intelligently with both heart and head in gear." MusicWeb on the Tribute to Johann Strauss