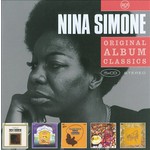 The Original Album Classics series by Sony BMG in Germany is an attempt to clear shelves of catalog titles that are lying about, but it inadvertently provides a great opportunity for those who have developed a sincere interest in an artist or band via a greatest-hits comp but have yet to score any actual titles, or for hardcore fans looking to fill in holes in their CD collections. These budget-priced, (loosely) chronologically compiled, completely remastered collections feature full-length albums -- in this case the five of the last seven albums from Nina Simone's RCA period: 'Nuff Said! (1968), Nina Simone and Piano! (1969) To Love Somebody (1969), Black Gold (1970), and It Is Finished (1974). What is missing here chronologically are two records: Here Comes the Sun, issued in 1971, and her classic, Emergency Ward!: In Concert album from 1972. The records contained in this slipcase box are, for many, a mixed bag, as Simone was branching out into much more adventurous terrain and simultaneously interpreting pop songs of the era in her own inimitable way. These are for the seasoned Simone fans who are well aware of her unpredictability and can celebrate it. For the novice who might be looking for more than a best-of, try her Colpix or Philips sides first for context.

Disc 1
In the Morning
Sunday In Savannah
Backlash Blues
Please Read Me
Gin House Blues
Why? (the King of Love is Dead)
Peace of Mind
Ain't Got No/I Got Life [From the Broadway Musical "Hair"]
I Loves You Porgy [From "Porgy and Bess"]
Take My Hand Precious Lord
Do What You Gotta Do

Disc 3
Introduction
Black is the Color of My True Love's Hair
Ain't Got No/I Got Life
Westwind
Who Knows Where the Time Goes
The Assignment Sequence
To Be Young, Gifted and Black song review

Disc 4
The Pusher
Com' By H'yere/Good Lord
Funkier Than a Mosquito's Tweeter
Mr. Bojangles
I Want a Little Sugar In My Bowl
Dambala
Let It Be Me
Obeah Woman