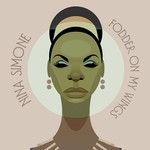 Nina Simone
Fodder On My Wings

Recorded in 1982, not long after she moved to Paris, Fodder On My Wings was one of Nina Simone's favourite albums yet has remained one of her most obscure. Over the years, the album has been re-evaluated and has received its due as a significant work in Simone's prolific catalogue.

Recorded at a time when Simone was feeling rejuvenated by her surroundings and by the African musicians she met in her newly adopted France, Fodder On My Wings is an essential Simone album that is making a long-overdue reappearance.

Fodder On My Wings, a lesser-known album by Nina Simone that was a personal favourite of the great songwriter-performer, will be reissued on 3 April via Verve/UMe.

The LP was recorded in 1982, soon after Simone moved to Paris, for a small French label. It has only been sporadically available since that initial release, and will now reappear in a variety of formats including CD and LP. It will also be available digitally for the first time, in both standard and hi-res audio.

The original album is augmented by three bonus tracks from the sessions, taken from a rare French reissue of 1988.