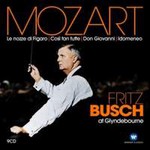 Fritz Busch (1890-1951) was one the greatest German conductors of the first half of the twentieth century, noted for his illuminating performances and his ethical principles. His father was a former itinerant musician who became an instrument maker, and his brothers were violinist Adolf Busch and cellist Hermann Busch. Fritz Busch went to Cologne Conservatory in 1909, studying conducting with Steinbach.

He became music director of the city of Aachen in 1912, serving there until World War I began. After serving in the army during the war, he returned to Aachen to conduct the Municipal Opera. Six weeks later, he was appointed music director of the Stuttgart Opera. He quickly became famous for his performances and for enlarging the repertory and discovering new composers. He premiered operas by Paul Hindemith and Pfitzner, and adopted the designer Adolphe Appia's revolutionary approach for a staging of Wagner's Ring. In 1922, Busch became music director of the Dresden State Opera. Among the premieres in his 11 years there were Strauss' Intermezzo (1924) and Die Ägyptische Helena (1928), Hindemith's Cardillac (1926), Busoni's Doktor Faust (1925), and Weill's Der Protagonist (1926). He maintained high artistic levels with often progressive and provocative stagings and used leading artists to design sets and costumes. At the 1932 Salzburg Festival he conducted a notable production of Mozart's Die Entführung aus dem Serail, designed by Carl Ebert and superbly cast,

Busch's open contempt of the Nazi government, which came to power in Germany in 1933, caused him to be fired from his post in Dresden. At the Teatro Colón in Buenos Aires he conducted the first-ever complete performance of Bach's St. Matthew Passion to be given in the Americas. He returned to Europe, appearing with the Danish Radio Symphony Orchestra and the Stockholm Philharmonic, beginning a long-standing relationship with them.

Then John Christie, a wealthy English landowner, invited Busch to become music director of a summer opera festival at Glyndebourne, a country estate not far from the coast in Sussex. Busch accepted, bringing Carl Ebert as artistic director. Glyndebourne soon became a prestigious summer festival, famous for meticulous musical preparation and astute casting. Mozart became they mainstay of Glyndebourne, but Busch also staged larger-scale works, including Donizetti's Don Pasquale and Verdi's Macbeth. After the outbreak of World War II (which closed Glyndebourne from 1939-1945 and made travel to Scandinavia impossible), Busch withdrew mainly to South America, although he made appearances at the New York Philharmonic. His Metropolitan Opera debut took place on November 26, 1945 with Wagner's Lohengrin. He remained on the Met's conducting roster until 1949, but focused on conducting the company's annual national tours. He frequently conducted the Chicago Symphony between 1948 and 1950, and resumed his association with the Scandinavian orchestras (in 1949) and with Glyndebourne (in 1950). He returned to lead a few concerts in Austria and Germany (Vienna State Opera, 1950; Cologne and Hamburg, 1951). Fritz Busch died in London on 14th September 1951.