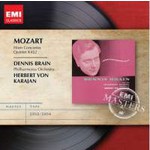 Dennis Brain came from the third generation of a family that produced five notable horn-players. His command of his instrument was such that he was able to produce an unmistakable personal tone that is instantly recognisable. His phenomenal technique and his apparent lack of nerves made him one of the great instrumentalists of his time (whether as solo, ensemble or orchestral player) and his reputation has achieved a legendary status in the nearly 50 years since his tragically early death in a car accident.