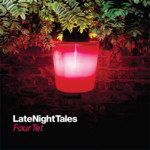 From sun-kissed 60s psychedelia (Manfred Mann, would you believe?) to cosmic jazz, to skullcrunchin' hip-hop (Gravediggaz) and Terry Riley's tape-loop cut-ups, seriously entertaining and even educational take on the chillout comp - as well as a peek at the myriad influences that are at work in Hebden's own music as Four Tet.

Highlights include Icarus' digital jazz deconstructions, the indescribable beauties of Linda Perlhac's Parallelograms and Koushik's woozy funk workouts. All in all, a rare treat composed of, er, rare treats. Thoroughly recommended. Also includes an exclusive cover version of the Jimi Hendrix
"Castles Made Of Sand".

Originally released in 2004 this mix has gone on to become a Late Night Tales classic, although it has never been previously released on vinyl.